It’s been quite a busy summer, specifically this past July! I’m still coming off a two week high from exploring eastern Europe with a close friend from my days studying abroad in London during our junior year of college. During our time abroad, we traveled as much as possible but knew that we’d need to make a return visit to Europe in order to cover all the ground we wanted to.

With that being said, we began brainstorming on where we’d want to go on this return visit. We decided to start with Croatia, a coastal country that we’d both been eyeing for some time now. We decided to choose other neighboring countries and make this an eastern European adventure. I’ll be chronicling the two weeks of travel in a few blog posts, breaking down the trip in two parts! Part one begins with Croatia of course, followed by Slovenia. Part two, encompassing Hungary and London, will up shortly!

An early evening in Split 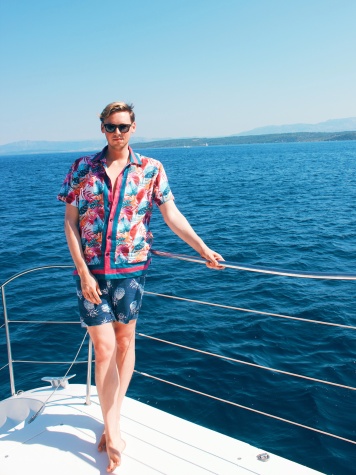 Boat Day on the Adriatic Sea

Let’s get started, shall we? Like I mentioned before, Croatia was the first on our must list, as we’d been wanting to travel there for years. Surely, it did not disappoint. After what felt like a full days travel from Chicago, we made it to Split, a coastal town that I can only compare to as a lovechild of Greece and Italy. Split was full of charm, small shops and lots of outdoor eateries.

The whole vacation was kicked off with a catamaran excursion around the Adriatic Sea, from sun up to sun down. We were given the chance to swim in the deep blue ocean and stop in Hvar, a ritzy island. (where I had the best pasta of my life) By the luck of timing, we got to watch Croatians celebrate their country’s World Cup Semi Final win. We loved watching the small beach town come to life that night.

Although our time in Croatia was for only a split second, no pun intended, it was a great way to ease us into this adventure. From Split, we headed towards Slovenia. Some of you might be thinking, “what or where is Slovenia?” and I was right there with you up until planning this trip. Slovenia boarders the north of Croatia, and only gained its independence just 26 years ago. After being able to enjoy it for 3 days, it’s perhaps one of my new favorite places.

Night one in Ljubljana

In love with Lake Bled

Based in the capital of Ljubljana, we could not have loved our time there more. Unlike any other European city I’ve been to before, there was something about Ljbjanana that was unlike anywhere else. For starters, the entire city center was pedestrian only. Closed to local traffic, locals and travelers are free to roam the streets and enjoy outdoor eating and drinking. On our first night, we enjoyed a local street food fair and spent the night sipping on Aperol Spritz until sundown. Streets are full of colorful, Austrian inspired buildings. I felt like I had walked into a fairytale.

The picture perfect surroundings didn’t stop there. The next day we took a day trip to Lake Bled, which was nothing short of stunning. The country’s lushest and ritziest lake town is centered around a tiny church, which you can only get to by row boat. For an even better view of the lake, we stormed the castle about Lake Bled. The view was breathtaking, and the photos don’t even do it justice. To unwind after such a busy morning, we took part in a wine tasting back in the city.

The time we spent on this first half of the trip was fantastic, and we install fell in love with the charm of these two countries. There’s something about small European towns that feels effortless and begins to inspire me. More inspiration and photos to come in part two, coming soon!

Air BNB in Croatia and Slovenia

Restaurant and Excursion in Split

2 thoughts on “Summer in Europe Part I”

we love a valentine moment 🖤 Happy Valentine’s Day!
hello again
looking into the future, and my vision’s 2020 😉// after a year of challenges and growth, I’m ready to see what the next decades holds! ✨Happy New Year ✨
merry everything 🌟
Fully decked the halls and now the countdown to Christmas begins! 5️⃣days left, link in bio on my full holiday home decor! 🎄🏠
just a couple of Adam Rip-offs ⛸